Mic is going full-time MJMeetings in 2019!

We recently celebrated Thanksgiving… a time to be thankful for the people in our lives and the good things that have happened over the past year. One of the people I am so thankful for is my fellow Blue Guru, Mic Johnson.

Starting in January, Mic will be working full time in the business that he and his wife Missy started 5 years ago called MJMeetings.

MJMeetings partners with Membership Associations, Nonprofit Organizations and Businesses to create successful, engaging and memorable face-to-face meetings and events that align with an organization’s strategic objectives – all while mitigating risk and saving time and money. 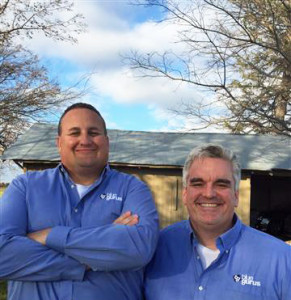 Mic has been working with me since 2010. Over the years, he’s been an amazing friend, hard worker, voice of reason, personal cheerleader, counselor, accountability partner, and so much more. I am going to miss working with him on a regular basis. (It’s really hard to write this blog post!)

Mic has always been there for me in the good times and the bad. And I know he will still be there for me if I ask, but it will be different… I’m sure you understand. Mic is an excellent sounding board. The final decision is usually better when we put our heads together, and I’m going to miss his input.

There have been lots of changes that keep reminding me about the transition… he isn’t telling his stories on the Blue Gurus blog. And we’re going to AT&T next week to deal with splitting up cell phone plans. (His cell phone number won’t change, but his new email address is mic@mjmeetings.com.)

True to form, Mic offset the emotions around that by taking me to lunch for my birthday before we go to AT&T. It’s just who he is. And it’s all part of the process for Mic to begin the next chapter.

I was caught off guard when they paused to thank me for my support in helping them get to this point. In the beginning, Mic and I did the MJMeetings website together at their house while Missy cooked us a yummy gourmet meal. (If you follow them on Facebook, you know they are foodies.) And as the months and years went by, we’ve talked about the business, bounced ideas around, and shared relevant experiences. It makes me really happy to know that I’ve played a small part in their success.

I’ve heard so many great stories about the companies they’re helping. Large meetings with hundreds of attendees. Complicated schedules. So many things that need to happen in just the right order. And significant savings compared to asking internal staff to make everything come together. There’s a reason MJMeetings has gotten past the 5 year mark. And the business is financially sound enough to bring Mic into the equation full time. Mic will be able to focus on the social aspects of the events while Missy focuses on the nitty-gritty details of making events happen. It’s a powerful combo that’s proven the value at recent events.

Mic, I’m sure you’re reading this. Thank you for all the years we’ve been working together. You’ve been one of the most impactful people on my life, and the words in this story don’t do our relationship justice. You’re an amazing person and I’m proud to know you. And you aren’t somebody that sucks.

Like we’ve always said to each other, love ya man. Looking forward to celebrating the 10 year anniversary of MJMeetings with you.

I've been lucky enough to get to work with Jason for the last six years, and I don't think it's possible to say too many good things about him or my experience!

The guys at Blue Gurus are not only some of the best at what they do, but they're a joy to work with in an on-going fashion! If you're in charge of the online presence at your business and you need a face lift to your website OR a more user friendly back end to the site, you shouldn't hesitate to reach out to Blue Gurus!

President at Get Smarter Prep