“I’m Just Trying To Get Away From People That Suck!”

A few months ago I had some time in between clients and I called Jason to share an, as Oprah would call it” ,”A-HA” moment.

In the weeks and months leading up to that call, I had been spending a lot of time reflecting on every step of my career to gain a better understanding of why it took me nearly 15 years to find something that I love to do every day.

I reflected on why I took each position over the course of my career, what my mindset was at the time, what I thought was important (size of company, salary, etc.), and so on. I also spent a lot of time analyzing the motivating factors that led me to leave each of those positions.

Going through the process taught me a lot about my career, but taught me even more about who I am as a person and what is core to my DNA. One of the most important lessons I learned is something that opened my eyes in more ways than one and helped lay the foundation for making real, positive, and lasting change in my life. The exact words I told Jason to describe this, and what I now believe is one of my secrets to career and life happiness, is this:

“I’ve realized that, my whole career, I’ve just been trying to get away from people that suck!” 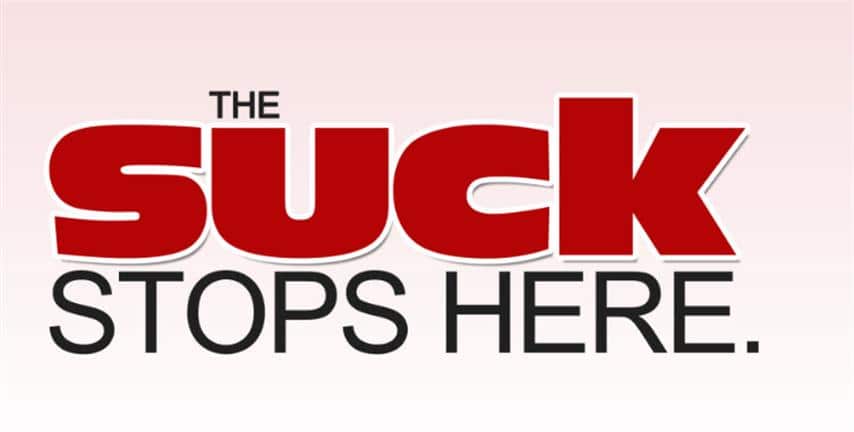 Jason laughed (as does every single person I tell the story to) because he knew exactly the type of people I was talking about. And I’m guessing you do too. Now I’m not literally saying that these people are bad people, have ill intent, or don’t have redeeming qualities. What I am saying is that there are certain characteristics about people that suck vs. people that are awesome. The sooner you learn to identify one vs. the other, the sooner you will become a much happier person in your career….and in your life.

Now that I have been fortunate enough to have learned this valuable lesson (way later in life than I wish I would have, but better late than never, right?), I feel it is my duty, my responsibility, in fact I believe it’s part of my calling, to share it with you so that you don’t waste one more second of your time on these type of people. I realize that my definition of “people that suck” may be different than yours and that’s OK. In the end, my goal in writing this article is simple and honest: I want you to get to your place of happy quicker than I did.

That may mean a job change. That may mean changing the way you’ve always done things. That may mean letting some people go that have been a part of your life for a long time. That may mean having some difficult conversations. That may mean being honest with yourself and with other people in your life in a way that you haven’t been before. That very likely will mean taking some calculated risks. It’s not an easy road. Not by any stretch of the imagination. But trust me when I tell you that it is absolutely, positively a road worth traveling.

10 Characteristics Of People That Suck
1. They don’t return calls in a timely manner.
2. They don’t respond to emails in a timely manner.
3. They attend networking events or groups with a “selling” mindset instead of a “helping” mindset.
4. They are TAKERS who routinely try to befriend GIVERS.
5. They don’t do what they told you they would do. Lack of common courtesy and accountability.
6. They rarely make an effort to do anything more than the bare minimum.
7. Their #1 priority in virtually every situation is “What’s in it for me?”
8. They make excuses. Lots of them. About everything.
9. They have a unique ability to rarely, if ever, look in the mirror and realize that they are a part of the problem.
10. They fight CHANGE with every fiber in their body. Their mentality of “that’s just the way things have always been done” or “that’s just the way I’ve always been”, as if sucking is in their DNA.

10 Characteristics Of People That Are Awesome
1. At their core, they LOVE helping people…without expecting anything in return. Helping is core to their DNA.
2. They give more than they take.
3. They return calls in a timely manner.
4. They return emails in a timely manner.
5. They CONSISTENTLY do what they tell you they are going to do. Accountability and common courtesy are built into the way they live their personal and professional lives.
6. They tout the success stories of other people around them.
7. They always say “Thank you”.
8. CARING is in their DNA.
9. They look at the bigger picture and understand the real value in raising other people up instead of just themselves.
10. They are natural connectors/referrers.

What do you think? What other characteristics have you witnessed from people that suck and people that are awesome? How have you gone about finding happiness in your career and in your life? I welcome and encourage your insight.

Effective Networking Notes from my Interview for the Enterprise.ing Podcast

As a client, the toughest part of the process was writing our website content. He made the rest easy!

"Jason is a pleasure to work with. He came in and in two web development sessions we completely revamped our website. As a client, the toughest part of the process was writing our website content. He made the rest easy! I would highly recommend Blue Gurus!"

Effective Networking Notes from my Interview for the Enterprise.ing Podcast

Nothing is harder than being consistent in marketing. But it’s worth it.