LEGO is for big kids too. Especially the LEGO 75192 UCS Millennium Falcon.

By Jason Terry, talking about his love of LEGO and recently building the biggest LEGO set ever produced, the LEGO 75192 UCS Millennium Falcon.

As I was getting ready to write this story, I had my doubts. LEGO is a hobby that I’ve loved since I was a little kid. I’m now 47 years old and I still buy LEGO sets. As I thought about sharing one of my hobbies with you, my internal negative voice said, “but it’s not professional… are you sure you want to risk putting that out there?”

My answer? Absolutely. Why? Because no matter what you love to do when you aren’t working, there are a ton of people that share the same passion. And putting it out there is the first step in making a connection with someone. So yeah, it also has a business purpose. 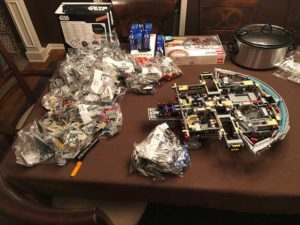 The LEGO UCS Millennium Falcon is the largest LEGO Star Wars set ever produced. For that matter, it’s the largest set LEGO has ever made period. I’m a huge fan of the Star Wars franchise, and when you combine that with LEGO, count me in. A typical LEGO set might have a couple hundred pieces, some of the larger sets around a thousand pieces. The UCS Falcon has 7,541 pieces and the instruction book has 468 pages with 1,379 steps for putting the set together. Want to see what that looks like? Here’s a link to the PDF of the instruction book.

When it was released in September of 2017, it sold out in a few hours. Keep in mind that the set is $800 and the LEGO Group had produced thousands of copies. They had no idea how well it was going to be received. I woke up at 2am on the morning it was released to try to order it online and it was already sold out. Sad face.

eBay to the Rescue

I ended up finding it on eBay a few weeks later at a premium, but not too much over what I would have paid in the store. Happy face!

I started putting the set together a little bit at a time. There was no way I was going to knock it out in one sitting like some people did. Their build times ranged from 13-15 hours. I wanted to enjoy the process and see it come together over time. It took me a little over a month to finish in 30-minute increments a few nights a week. And it was worth it. It’s the most amazing LEGO set I’ve ever built. 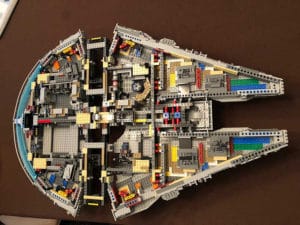 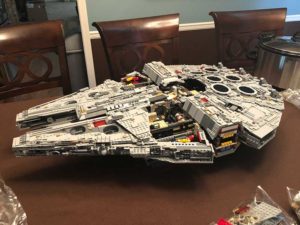 When I finally got the set built, I realized just how massive it was. And it was going to be a problem to find a place to put it. I realized I needed some kind of stand to put it on so that it would be on its side. That way it would be taller, but have a smaller footprint. I found instructions from a LEGO enthusiast named Efferman. He created a LEGO Technic Display Stand as well as the instructions to build it. The only problem is that I didn’t have the four hundred and seven LEGO pieces required to build the (complicated) stand.

BrickLink to the Rescue (Lots of Rescue Going on Here) 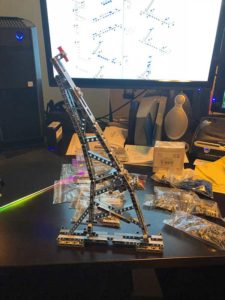 Remember me telling you that there are a ton of people that share the same passion you have about a particular hobby?

There are thousands of people that sell LEGO pieces in an online market called BrickLink. And when a build like Efferman’s LEGO Technic Display Stand becomes popular, the sellers on BrickLink package up all the required pieces so that you can buy them with the click of a button. So I went to the “Buy Parts” link on Efferman’s site and found a bunch of BrickLink sellers offering the parts for the display stand.

The guy I ended up buying the parts from lives in Stelermark, Austria. His name is Daniel and his BrickLink store is called Alpine Bricks. He currently has over 10,000 lots available for people to buy, so it’s actually a small business. And he’s just one of thousands of sellers on BrickLink. It’s crazy, right?

Anyway, I got the LEGO parts in the mail in less than a week and built the stand. (It was a complicated build on its own!) But when it was finished, it was sturdy and would position the Falcon on its side. It ended up looking like it was in mid-flight! 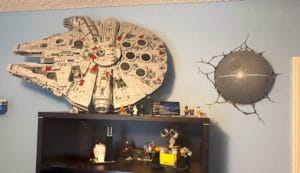 Here’s what the LEGO Falcon looks like displayed in my office. I put it on top of one of my book shelves because that’s about the only place I had room for it.

If you’re a Star Wars fan, you may notice the Death Star coming out of the wall to the right of the Falcon. It’s a cool decorative light from 3DFX. (Yes, it has batteries and can be turned on when the lights are out.) And fans of the Pixar movie WALL-E might see a familiar face on the shelf under the Falcon.

And there you have it. I obviously love LEGO and put some energy into writing this story because I care about my hobby. Some of you won’t have gotten this far because you could care less about LEGO. Others might feel a little spark of delight because you remember building LEGO as a kid. Or maybe you’re still building with your own kids.

It will be interesting to see how people react to this story. Do you enjoy LEGO? Is there a hobby that you are just as passionate about? I would love to hear about it. And don’t forget… don’t be afraid to share something that you love to do with the world. Yes, even if it’s in a business setting.