I Don’t Have Time To Waste On LinkedIn

I had a shocking thing happen to me last week at an event downtown. I was in a room full of great companies, many of which were fairly new. The entrepreneurial spirit was alive and well in the room and I had a great time meeting people and learning about the new businesses. During the event, I was introduced to someone as “a blogger and LinkedIn Trainer”.

What they said next caught me completely off guard.

“There’s actually training for LinkedIn? I don’t believe in LinkedIn. It’s just a bunch of people inviting me that I don’t know. Or people looking for a job. I don’t have time to waste on LinkedIn.”

Their attitude was dismissive to say the least. It’s important to know that this person is directly involved in sales for their company and fairly high in the seniority pecking order. It’s a large company with hundreds of employees. And, ironically, we’ve trained the executive teams and key producers employed by eight other well known companies that compete in their industry in Kansas City!

Let me take a step back for a second. We used to hear this kind of stuff more often but that was FIVE YEARS AGO. People had profiles on LinkedIn but rarely logged in to use it. People worried about putting themselves out there. Some people believed it was a fad, and some said they didn’t have time for it. It was early on in the major shift that was happening in business as social media began forcing a change in the way we buy and sell products and services.

LinkedIn has been around since December 2002. That’s amazing when you really think about it… LinkedIn is 14 years old as I’m writing this. Blue Gurus has been around since 2009. We’ve been training companies to use LinkedIn for going on 7 years now. We were teaching people how to use LinkedIn before it was cool and considered an integral part of doing business. And it was an uphill battle for years because people just didn’t understand the power of relationship through LinkedIn and storytelling through blogging.

Ok, back to the story… 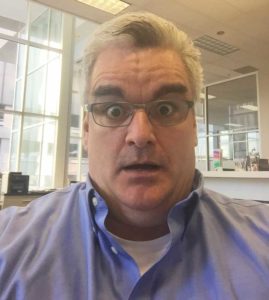 I was shocked at this person’s statements in 2016 about LinkedIn. Many of you know that I’m rarely at a loss for words, but it took me a few seconds to respond. The friend who had introduced us was obviously shocked as well. My honest response would have been, “You have no idea what you’re talking about. I assume you’ve never spent any real time or effort on LinkedIn. And I think it’s interesting that you would say things like that to someone when first meeting them.” Of course I didn’t say that… but I wanted to.

When I told Mic about the exchange and he said something that really resonated with me:

“I can’t stand people like that. They’ve been that way their whole career and nobody has called them on their bullshit. This person obviously hasn’t used LinkedIn, but they speak confidently like they have. They mock what they don’t understand.”

The thing that’s unfortunate is that this person has the ability to make a BIG difference in their company if they weren’t so closed-minded about new ideas and methods. If the attitude I witnessed is pervasive throughout their company and culture, they’re going to have a much harder time winning friends and influencing people in a very competitive market. And it’s a market where their competitors are embracing LinkedIn and blogging and seeing amazing results.

My hope for everyone reading this is that you don’t have people like this in your company. And don’t get me wrong… I love animated conversations with passionate people about any topic. I just think it’s important to be open minded and respectful when doing so.

You don’t have time to waste on LinkedIn? Seriously?