Recently Chris Geis, President of Kansas City Peterbilt, contacted me to talk about using Facebook for his business. Chris and I have known each other since college (ROCK CHALK!) and he knew I was a social media consultant for Blue Gurus.

We met for lunch and, like many of the Presidents/CEO’s that Jason and I meet, Chris told me that he wasn’t on Facebook much personally and that he didn’t really understand all of the “social media stuff”.

He went on to say that many of his employees had been telling him that they needed to be using social media and that their customers (primarily truck drivers and truck owners) were asking why they weren’t on Facebook. Apparently truck drivers spend a lot of their spare time on the road interacting with people and companies on Facebook! Who knew?

I answered several questions Chris had about Facebook and told him that Jason and I also help companies with LinkedIn, blogging, WordPress web sites, Twitter, and more. We agreed that Facebook would be a great place for Kansas City Peterbilt to get their social media feet wet. Chris said he wanted to go back and talk to his employees and that he would get back with me if they decided to move forward. A couple of weeks later Chris called and said he wanted me to meet with his entire team so that everyone could ask questions and have input in the process.

Very early on during that meeting I discovered that one of their administrative assistants/receptionists had already created a Facebook page and had been posting content on a fairly regular basis for a couple of months. The issue, however, was that page only had 14 “LIKE’s” so the content wasn’t being seen by anyone.

As the meeting progressed, it quickly became clear to me that the entire Peterbilt team was VERY passionate about engaging their customer base on their Facebook page. We all began brainstorming on how they could use the page to promote specials on truck parts, to answer questions from truckers, to post pictures of trucks they built, to let customers post pictures of their trucks, to post information about job openings at Kansas City Peterbilt, and so much more. 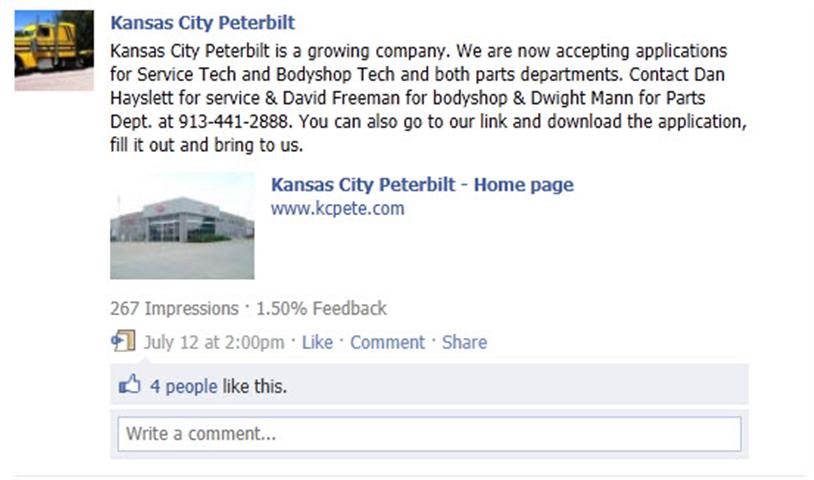 We came up with so many ideas in such a short period of time and it was just awesome to see their energy and enthusiasm. I knew then that this was only the beginning for Kansas City Peterbilt and their social media potential. I told the team to start spreading the word that their Facebook page was “live” and they jumped on it immediately…and by immediately, I mean before I even left their office!

By the time my two hour meeting was up, the “LIKE’s” on the Kansas City Peterbilt Facebook Page had gone from 14 to over 200! Within less than a week, they were over 500! Even better, while I was there working with Chris, they had a customer post a message asking about a part special they had seen on the page. We responded to the customer right then and there on Facebook and they had an opportunity to make a sale. How cool is that?

I spoke to Chris recently about the experience and he had this to say:

“It was really neat to see the excitement on the team. It got the juices flowing for everyone! Also, one of the things I thought was really neat was that we posted a job opening telling our Facebook fans that we were looking for service and body shop technicians. We got three guys that said they saw it on Facebook who came in and filled out applications.”

So what lessons can every business and business owner take away from this story?

This story isn’t always going to play out this way in the world of social media because every business has its variables and hurdles to social media success. The point is, if Chris wasn’t listening to his employees (who, by the way, were listening to the truckers that were asking Kansas City Peterbilt to be on Facebook), then the whole opportunity would have been missed.

Social media is about passion and engagement and, done right, it can reinvigorate not just a customer base….but an entire company. Why would you want to ignore that?