Hi friends!  It’s Jason with the Blue Gurus blog post for this week.

I really enjoy meeting new people and training them on using LinkedIn and blogging to grow their businesses.  I got a good dose of that feeling today when I did a 3 hour, in-depth training session on LinkedIn for Enterprise University.  EU is a training program that Enterprise Bank offers to customers and prospects.  There were about 35 people in the class today and we met at the Hallbrook Country Club, a beautiful venue for sure.

As I was driving to the club at 7:30 am, I was thinking about the fact that today is 9/11.  It’s hard to believe that today is the 13th anniversary of the terrible events and thousands of lives lost on September 11th, 2001.  I remember exactly where I was at when it was happening.  I was with my family in Colorado.  We had rented a cabin in Colorado Springs as our staging point for Garden of the Gods, the Pike’s Peak cog railway, hiking up Seven Falls, and more.

On the morning of 9/11/01, we were going to take the cog railway up Pike’s Peak.  I went out to the car to wait for the rest of my family and turned on the radio.  The station it was on had some person talking, so I changed the channel.  The next station I found had another person talking, so I changed the channel again.  When I got to the third station and it was still someone talking, I started to listen and realized everyone was reporting that planes were crashing into the World Trade Center.  I couldn’t believe it.  I went back into the cabin, and we turned on the TV and watched the news unfold for the next two hours.  I was shocked, heart broken, and angry.  The emotions were raw and stayed with me for weeks.

And then a year went by.  I remembered the events like they were yesterday on the first anniversary.  And then a couple more years went by.  Lots of things happened in life and in business.  I got married.  Moved a couple of times.  Started my own business.  And thirteen years later  I found myself in the Enterprise University class at Hallbrook Country Club getting ready to teach people a lot of cool stuff about LinkedIn.  I wanted to recognize the day as a group, but I didn’t really know what to do.  A moment of silence?  A quick discussion?  I just didn’t know what to do. 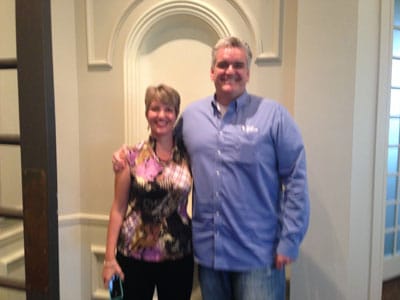 Luckily, I was saved by Britt.  Britt came to the class to learn about networking on LinkedIn.  She is a singer.  She sings at weddings, sports events, funerals and corporate events.  During one of the breaks, she came over to me and said, “You know, it’s 9/11.  Do you think it would be appropriate if I sang the national anthem?”  I was floored.  I mean it.  You know that I am rarely at a loss for words, but it took me a minute to respond to Britt.  I loved the idea and pulled up a picture of the American flag on the big screen I was using for my training.

When everyone got back from the break, I asked them to stand for the National Anthem in memory of 9/11.  It got really, really quiet.  Britt sang the anthem beautifully.  It was an amazing moment.  Here was a room full of business people that didn’t really know each other.  And we all took a minute to remember the events of 9/11 together.  Some people sang along quietly.  Others had their hands over their heart.  And it was one of those moving moments that doesn’t happen very often.  It was unexpected.  And powerful.  I was so thankful that Britt was brave enough to sing in front of the group.

For me, there really is no distinction between “business” and “personal”.  It’s just life.  I am the same person whether we are training your executive team on LinkedIn or having a beer together at a Royals baseball game.  Today was a reminder to me that we are in this together and there is always common ground.

So as you read this, I hope you will join me in remembering 9/11.  If you knew or were related to anyone at ground zero that lost their life, I am so sorry.  And my respect and thanks to the bravery of the police, firefighters and other services that responded so quickly trying to help.