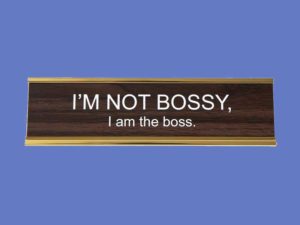 I’ve heard quite a few stories over the past couple of months about bosses that can be real jerks. When I was talking with a good friend recently about a past bad boss experience of my own, he said, “Sounds like he was being a Bosshole.” It made me laugh! I hadn’t heard that term before.

There’s even an entry in the Urban Dictionary that defines Bosshole as “an employer of a particularly evil nature, completely devoid of empathy or concern for anyone else. The deadly hybrid of boss and a**hole.”

If you Google the term Bosshole, you’ll find quite a few articles and videos on the subject. It’s an important topic when you actually stop and think about it. One of the biggest reasons employees are unhappy in their jobs is because of the person they work for. This usually results in people quitting, or worse… staying and doing just enough to get by. Either scenario is an expensive problem for any company to deal with.

Here’s a list of behaviors to help people avoid being called Bossholes:

I mentioned this recently, but if you missed it, check out this Simon Sinek video: Why good leaders make you feel safe.

Give Credit Instead of Taking Credit

Bossholes are insecure. One of the things they do is take credit for anything they can to make themselves feel important and valuable. When you give credit to the person or people who deserve it, you’re exhibiting two things:
1. You’re secure in your position and abilities.
2. You truly value your employees.

Do What You Say You’re Going To Do

That raise you promised? The software you were going to buy to make their lives easier? The person you were going to fire because they just won’t carry their own weight? Don’t tell people you’re going to do something and not follow through. There’s no quicker way to lose their trust. But sometimes things change… I get that. That leads me to the next point.

When you screw up, and we all do… say you’re sorry publicly. This shows your team that you own your mistakes and that you have the courage to say it openly.

Be Careful With Email

Do you know a boss that has a split personality? They’re nice in person and a tyrant in their emails. I’ve heard plenty of stories about email bashing. The easiest litmus test is to ask yourself if you would say the things in your email to the person’s face. Often, the answer is no. It might be more effective to pick up the phone.

Be Fair With Time Off

If an employee works back-to-back 10-12 hour days because of a deadline or problem, give them some unexpected time off. Work it in when things aren’t quite as busy or consider giving them a couple of half days off on Fridays.

Be a Better Listener

This one is hard… for all of us. But it’s important to try. A lot of problems can be avoided or at least navigated more easily if people feel like their concerns are being heard. When we listen, we can avoid making the same mistakes over and over again. We learn about issues before they blossom into major problems. And when you ask about their personal lives, they’ll know that you care about them as a person… and not just as an employee.

Anything to add to this list? Did this resonate with you? Let me know in the comments, or shoot me an email at jason@bluegurus.com. Thanks for reading!

(P.S. – If you liked the featured image for this blog post, it’s a Big Personality Desk Sign you can buy for $28 at UncommonGoods.com. There’s also one that says, “I’m kind of a big deal.” Hilarious!)

The Blue Gurus are hands down the easiest and most fun way to set up and manage a website.

They took us step-by-step through the process of overhauling our organization's website and have been helping us keep it fresh and up to date for over 5 years. They make hard things seem easy; they are friendly, funny, and a true joy to work with.