By Jason Terry, talking about donating LinkedIn training to the staff at City Union Mission.

Here is their mission statement.

We are an evangelical Christian ministry committed to sharing the
gospel and meeting the spiritual, physical, and emotional needs
of men, women, and children who are poor or homeless.

Every few years, my friend Dennis Chapman reaches out to see if we would be willing to provide LinkedIn training for their team. The last time we did so was at least five years ago, and their team has grown a lot since then. Not just in numbers, but in how savvy they are with social media. That said, there was a gap when it came to LinkedIn. There were some needed tweaks on some of their individual profiles, and they weren’t updating their LinkedIn company page regularly.

One of the things we see regularly with not-for-profit organizations is that they have a good handle on Facebook, maybe an email newsletter, and a decent website. Unfortunately, there’s usually missed opportunity when it comes to a LinkedIn strategy. The reason it matters? People that donate money often have jobs at companies in the community. And the majority of those people are on LinkedIn. It’s a trend that these people don’t use Facebook nearly as much as they used LinkedIn, so it’s important for City Union Mission to tell their stories on LinkedIn. The last time they had updated LinkedIn was six months ago. But they are updating Facebook almost daily. 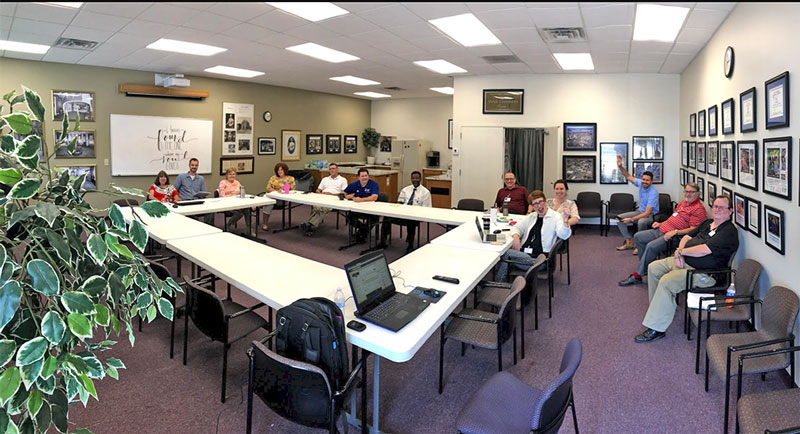 So I said YES to Dennis about donating LinkedIn training.

We got together recently for about an hour and a half. I covered profile best practices, how to use LinkedIn on a regular basis and then touched on some research methods using the data that can be found in LinkedIn. We also talked a lot about telling stories and strategies to do this consistently across their website and social media accounts.

I was really impressed with how engaged everyone was. They asked great questions, and gave me great feedback after the training. I could tell they had learned some things that they were going to act on, the most important being to do personal status updates on their LinkedIn profiles. And the plan is for the marketing team to start updating their LinkedIn company page regularly.

On a personal note, as I was driving to their offices, I passed a man sitting under a bridge that was likely homeless. I usually go through conflicting emotions about giving someone in that situation some cash, and then worry about what they would do with it. I’m confident that supporting City Union Mission financially is a really good answer to that dilemma. The dollars will be used in the right way and make a difference where the money is needed.

As always, thanks for reading!

Blue Gurus is top notch in their field!

We have known and worked with Jason for more than 15 years. He has helped us design our website several times as technology has changed, keeping it fresh, current and easy to modify. His knowledge of the industry is incredible and he has a great way of sharing that information and educating others in a way that's understandable.