Throwing Axes at Blade and Timber is a Blast!

I mentioned in my post two weeks ago that Hats Club was going to be at Blade and Timber. I had so much fun that I wanted to share some photos and videos so that you can get a feel for Blade and Timber. The verdict? It’s a blast.

As you can see in the panoramic image, there are quite a few lanes for throwing axes. Each lane has a long table next to it so that people not currently throwing can sit, relax, and watch as you attempt to stick an axe in the wall. I got there a bit early and watched the dynamics of a couple of groups that were having a team building outing at Blade and Timber. They looked like they were having a lot of fun together. At the end, they got a big team picture in front of a wooden wall with the Blade and Timber logo on it… see the pic below. 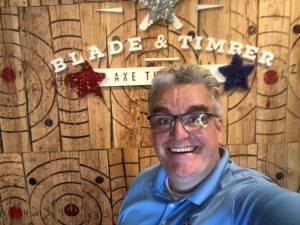 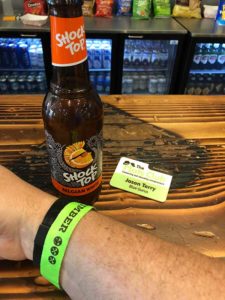 One of the questions everyone asks is how do they handle drinking alcohol and throwing axes at the same time? When you walk in, the first thing you do is sign a waiver of liability. Once that’s done, they give you a green wristband that has three little punch areas. For each drink you order, they punch one of the symbols. You can have three drinks in a 90-minute session… but if you want to get a fourth, they put a red wristband on you to signify you can no longer throw axes. It’s an easy system that makes sense.

About an hour later, the Hats Club members started to show up. The thing that made me smile is how quickly everyone wanted to give axe throwing a try. Some people have never held an axe before, let alone throwing an axe. The axes weigh three pounds and look sharp enough to do some damage. That didn’t stop people from stepping up to learn and throw. 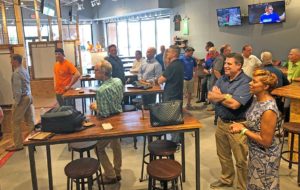 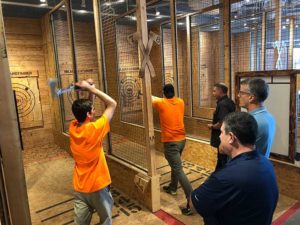 The axe throwing coaches are really helpful. My coach was Thomas, and he was very helpful. I was sticking the axe in the target pretty quickly based on his suggestions. The coaches are easy to spot in their orange Blade & Timber Coach shirts, and they’re always willing to help if you are struggling to make an axe stick.

I thought the second picture above was funny because I caught a moment on camera that looked like one of the coaches was about to nail another coach with an axe. That said, it’s a safe environment. I saw a birthday party of five young boys that were throwing kid sized axes that weigh two pounds.

If you haven’t been to Blade and Timber yet, I encourage you to try it out soon. Put a date on the calendar to make sure it happens. It will be worth it!

Check out the video below of me getting a bullseye. You can throw one-handed or two-handed. I thought one-handed was harder, so I was trying to get consistent with a one-handed throw. It was really satisfying when the axe stuck right where I wanted it to land!

Commission Breath is Bad. Nobody wants that kind of pressure.