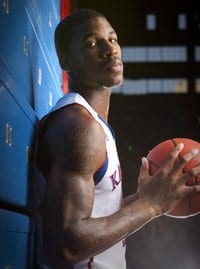 I wanted to let everyone know that Mic has a big heart.  This story is about Mic, social media and community grieving.

Background
A couple things you may not know about Mic: Mic is a KU sports fanatic.  I should capitalize the word FANATIC.  Another thing you might not know is that Mic lost his father to cancer when he was in his early 20s.  For those of you not familiar with the name Thomas Robinson, he is a great basketball player on the KU basketball team.  In a three-week span, Thomas, a sophomore forward for the Jayhawks, and his sister Jayla lost their grandmother, grandfather and mother.

Now that you know the background, here is the story:

Mic felt common ground when he heard about Thomas losing his mom too early in life.  He felt so strongly about trying to help that he decided to start a Facebook Fan page called JayhawkNation4ThomasRobinson.  He created the page last Wednesday afternoon and by the end of the day there were already hundreds of fans of the page.  People from all over the country were offering their wishes of hope, their prayers, even offers to adopt Thomas and Jayla.  Over the last few days, the fan page has grown to 8,336 fans!  Thomas told Mic electronically how much he appreciated Mic and the support of the thousands of KU fans that had taken the time to write on the fan page.

This story isn’t about Blue Gurus.  It is a story about the power of social media.  Facebook provides a way for a bunch of people to come together in good times or bad to share common emotions, opinions, and relevant information.  In this situation, a grieving young man felt the very real outreach of thousands of people that he probably doesn’t know.  I have no doubt that this support is helping Thomas put one foot in front of the other as he deals with the pain of loss.  I am not a big KU fan because I went to KSU.  <grin>  I’m not really a big sports fan either.  Still, this has had an impact on me.  Watching Mic help others through social media has been an amazing experience.  Mic has been blown away at the response as well.

If you have a minute, check out the unbelievable amount of love, concern and hope being poured out on the JayhawkNation4ThomasRobinson Fan page.

We have worked with Blue Gurus since 2010, and in that time they've become trusted colleagues and friends.

"One thing becomes very clear soon after you meet Jason. He genuinely cares about you and helping your business. We have worked with Blue Gurus for more than six years and in that time they have become trusted colleagues and friends. Including our new LaunchKC website, they have guided us through four new Wordpress websites for our various initiatives at the Downtown Council.

In addition, they have taught us the importance of having a strong presence on social media and have helped us grow our audience on Twitter, Facebook and LinkedIn. Blue Gurus always makes this process very fun and affordable. I have not worked with a better team in my ten years at the Downtown, I am honored to call them business partners and friends."