“We just completed our new business web site with Blue Gurus. When I started down this path I was truly dreading the process. As a business owner, I had been through the build out of two sites. It took months and was painfully time consuming. I was referred to Blue Gurus by our IT guy, Tony Sheets. From the first conversation, I knew I was in the right spot.  My contact, Mic Johnson, told me it would take 2-3 days to do our new site. He explained that they would come to my office and knock it out. I COULD NOT wrap my brain around how that would work…much less actually happen. Blue Gurus gave me precise front end instructions and sure enough, in two days, we built an entire website together! AND its a great site!!! The Blue Gurus staff was extremely professional and energetic. It was an outstanding experience with outstanding people.”
Robin Reynolds, Owner, revelageMD

The opportunity to work with revelageMD on their new website came as a referral from our good friend Tony Sheets of Umzuzu. Tony told us that he had known and worked with Robin Reynolds (one of the owners who was launching the revelageMD business) for most of his adult life. Robin contacted Tony asking him if he had any recommendations of companies that could help build a web site for her new business. Tony replied to her (and Blue Gurus) in an email saying:

“This is a very easy recommendation these days. For the last couple of years I’ve been sending all website requests over to Blue Gurus. I keep hearing positive feedback and thank you’s for the introduction……….Blue Gurus: I’ve worked with Robin and her team my entire adult life. Be as awesome as usual with them.”

Shortly thereafter, Mic contacted Robin and had a great phone conversation explaining the Blue Gurus on-site WordPress web development approach and how it ultimately ties into the blogging and LinkedIn training services we offer. Robin listened to everything Mic was telling her and kept saying “That totally makes sense. We totally need to be doing that.”

Mic sent her the web site proposal and they had one more follow up conversation to clarify a few things. Robin told Mic that she trusted him and Tony Sheets, but she still couldn’t get her arms around how the work would be done on-site. Thankfully, she trusted her instincts, signed the contract and shortly thereafter we scheduled the two full-day sessions to work at her office.

Once we started working together, it became very clear early on that Blue Gurus and revelageMD were great culture fits for each other. We thoroughly enjoyed working with Robin, who told us more than once “You guys are awesome. I can’t believe how quickly this is going. It’s so painless…and fun!”

We collaborated together throughout the two days and Robin did a great job of coming prepared with content, images, and other items she wanted to include on the site. We made several decisions together that improved the look, feel and functionality of the site. When it was all said and done, we were all thrilled with the site (and it got great feedback from people that Robin and her team shared it with)…but also we were all a little bit sad that we weren’t going to be working together on the web site for a few more weeks. It was just so much fun!

We’re looking forward to an ongoing relationship with Robin, her team and revelageMD. This project was another great example of one of Mic’s favorite mantras: “When you get awesome people together, that’s when the magic happens.” 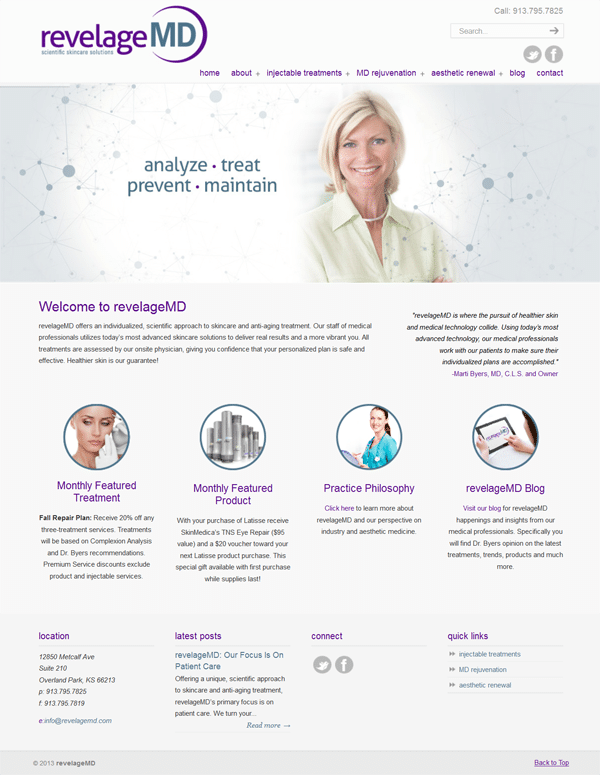 You shouldn't hesitate to have Blue Gurus show you how.

You won't find more dedicated professionals. Jason understands what it takes to get and keep clients. His dedication to quality and service is top notch. He is willing to do what it takes to make sure things are done right and the customer is completely satisfied. We have known each other since 2007 and have remained good friends. The more time I spend with Jason the more impressed I am at the time and energy he puts into his work. He is a great communicator and relates to people on many levels. He's easy to talk to and is fun to be around.

If you are looking for a company to help you grow your business through LinkedIn or Blogging, you shouldn't hesitate to have Blue Gurus show you how.