“I have been involved in the redesign of a couple of websites before working with Blue Gurus. Working with Blue Gurus was by far the best experience I’ve had in developing a new site. In the other cases, we’d created the site from ground zero. WordPress simplified the redesign tremendously, while still giving us the flexibility that we needed within our site. The process went according to schedule and budget, and was relatively painless. Our site had been constantly updated and had grown over the past eight years, so it was full of content that needed to be moved. Blue Gurus helped us to take our existing content and make it look fresh and new by using the multitude of design options within our WordPress theme.”
– Melinda Farris, Executive Vice President at International Association of Operative Millers

We were referred to Melinda Farris at the International Association of Operative Millers (IAOM) by Tony Sheets, one of our good friends at Umzuzu.  Jason sat down with Melinda to talk about what they needed and the first thing he noticed was that Melinda was technical and had a strong background in website development.  This turned out to be a great help later in the project…

IAOM wanted a website that was easier to maintain and that had an updated look and feel.  Their old site was good, but you could tell it was becoming dated.  After talking about how we do the work on-site in a collaborative setting, Melinda was ready to get going!

Fellow Blue Gurus, Mic and Melissa, did the bulk of this project were were all thrilled with how it turned out. The biggest challenge on this project was the sheer bulk of content that needed to repurposed from IAOM’s old web site.  That is just one of the ways Melinda from IAOM was able to help make the project a success and stay within budget.

She was able to move some big chunks of content over that she had created.  She also picked up how to use JotForms for the many forms on the site.  Jason did the three big forms initially, but Melinda now knows how to create her own forms for future event enrollments and more.

We learn something new during every project.  One of the interesting goals Melinda had was to be able to translate her website into multiple languages.  IAOM’s audience is all over the globe and many of her members don’t speak English as a primary language.  With that in mind, Jason did some research and found Google Translate.

It works very well and Jason  even wrote a blog post about it that you can read here.  For IAOM, we created links to Arabic, Chinese, French, Italian, Russian and Spanish versions of their site! 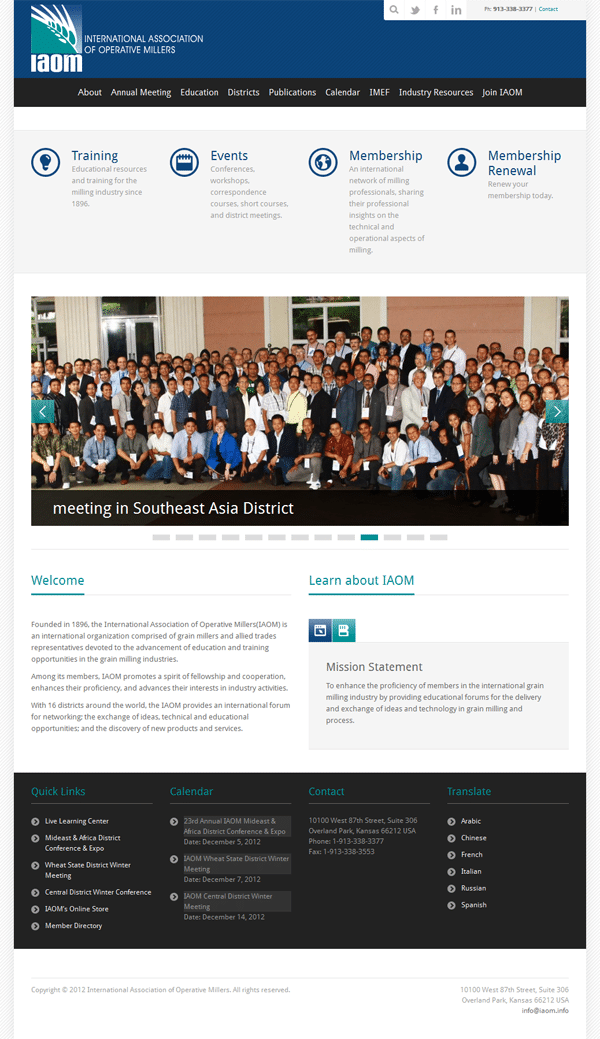