“A funny thing happens every time the Downtown Council staff prepares for a meeting with the Blue Gurus. We actually look forward to seeing them, learning from them and being inspired by them. The Blue Gurus are great teachers, particularly when navigating a potentially mind-numbing IT lesson. They make it manageable, affordable, practical and fun! In the two years that we have been working with the Blue Gurus, we have come to count on them as trusted members of our team. They coached us through a complete conversion of our old website into a new WordPress site, and set the bar high as they led us through the ins and outs of launching our LinkedIn and Facebook presence. Jason often tells me that his goal is to get things done efficiently and to have fun during the process. Well, my friend, you are getting it done beautifully.”
Mike Hurd, Director of Marketing

The Downtown Council of Kansas City is the perfect example of how doing good work for one company will lead to referrals to other companies that they do business with. Jason did a lot of work for Terri Hurd when she was the VP of Marketing at First National Bank of Olathe.

The key factors were as follows:

1. The collaborative nature of how Blue Gurus does WordPress web site projects ON SITE over 4-5 half-day sessions per week.

2. Timing – Blue Gurus could get the project done faster than every other company they were looking at.

3. Price – The final price for Blue Gurus was half the cost of what the other proposals were.

Since launching the site, we have worked with The Downtown Council of Kansas City every month on their web site and social media efforts. We’ve added new functionality, changed things around, and made the site better. We think this is an important lesson for all companies. Your site is a living, breathing, “thing” and you need to routinely give it the attention that it deserves. Especially when blogging…and The Downtown Council of Kansas City does an excellent job with a team-based approach to blogging.

Finally, every single person on The Downtown Council team contributed to the final site. They were responsible for their own content and they all learned how to add content themselves using WordPress. 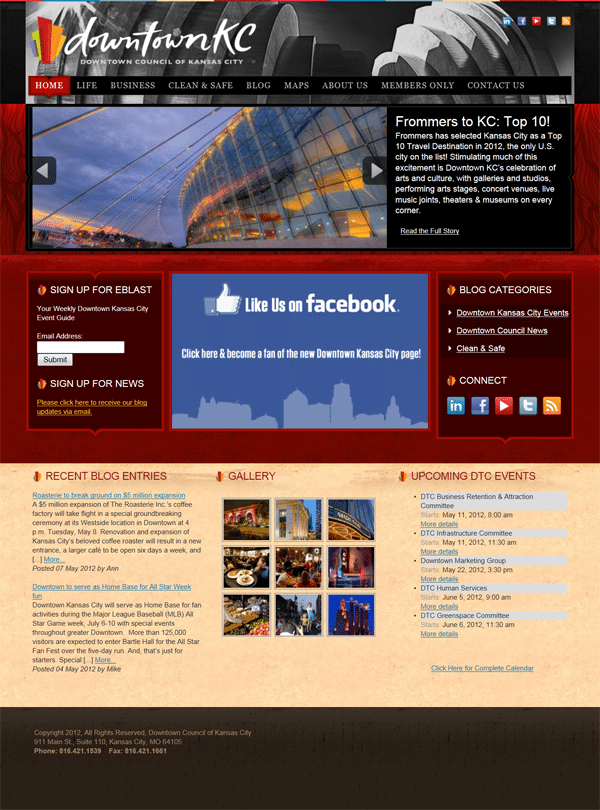 Commission Breath is Bad. Nobody wants that kind of pressure.