Tech Tip: Wi-Fi Calling Next Time You’re At The Lake!

Recently I went to the lake with some of my business friends. We’re part of a peer advisory group together and go to the lake a couple of times a year. The goal is to have more focused time together. To strengthen our relationships. But most importantly, to have some fun.

One of the challenges when going to the lake is that cell reception is spotty at best. In many places, there’s no service at all. I mentioned this to Jason Moxness and he gave me a solution to my problem. (Kudos to Moxness for inspiring this blog post!) 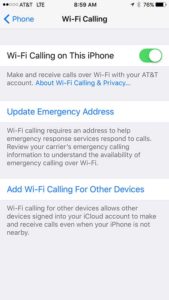 The house we were staying at had great Wi-Fi, so once I made the setting change in my phone, I was able to call and text like normal. Awesome.

It was a bit embarrassing that a banker taught me something technical.

I am usually the technical one solving his problems. Case in point, he had an email sync problem that involved IMAP settings and Google Email Folder view settings that I fixed for him earlier that day. It’s a good reminder that nobody has all the answers and it’s important to ask for help when you are struggling with something.

The only thing that’s a bit weird about switching from cellular calling to Wi-Fi calling is how 911 calls are handled. Normally, when you make a 911 call and you’re connected to a cell tower, the operator has a very good idea of where you are physically located. That changes drastically when you are calling over Wi-Fi because your location depends on your internet service provider network. In layman’s terms, I could be calling from the Lake of the Ozarks and it look like I am calling from St. Louis.

As a result, when you switch to Wi-Fi calling on your phone, you have to accept some terms and conditions related to 911 calls. You also have to specify the physical address that you would want 911 responders to go to in the case of an emergency. It’s something to be mindful of and understand if you start using Wi-Fi calling a lot.

(I decided to turn Wi-Fi calling off when I got back to Kansas City. In the event of an emergency, I don’t want responders going to my house!)

Setting Wi-Fi Calling up on an iPhone

Go to Settings | Phone | Wi-Fi Calling. Drag the little slider to the ON position and follow the prompts.

Open the Settings app on your Android phone and tap the “More” or “More Settings” button under Wireless & network. You’ll see a “Wi-Fi Calling” option on the next screen – activate it to enable the feature. If you don’t want to use Wi-FI calling, you can disable it from here, too. This option won’t show up unless you’re using a phone with Wi-Fi calling support..

I hope this was a helpful tip… I’ve asked quite a few people if they knew about this capability on their phones. Based on a survey of about 20 people, more than half of them were aware this was possible. I was in the minority that DIDN’T know. It was really useful to learn that Wi-Fi calling was available on my iPhone!

P.S. If you were wondering how my step discipline is going, I’m still walking at least 10,000 steps every day. I walked a total of 36 miles last week.