Thanks to the Kansas City Royals, I’m Exhausted. 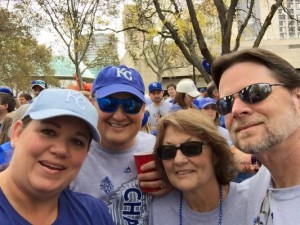 I was trying to decide what I wanted to write about today and all I could think about was the Kansas City Royals.

Let’s be honest…that’s all that most people in Kansas City have been thinking about for the entire month of October.

And if we’re really honest, it’s all that most people in Kansas City have been thinking about since the Royals won the 2014 Wild Card Game, went to the 2014 World Series and came oh so close, and then won the 2015 World Series.

I still can’t believe it. I think all of us feel that way.

It had been 30 years since the city last came together to celebrate a championship.

And that parade…oh, that parade…800,000 people gathered on a gorgeous, sun-drenched November day…and celebrated the Royals and the city unlike anything we’ve ever seen. 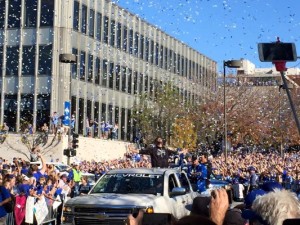 And now I’m exhausted. We’re all exhausted. But it’s one of those “I’ve had more fun than a person should legally be allowed to have in one month” kind of exhausted.

So thank you to the Kansas City Royals.

Thank you to the city for a parade that made Kansas City shine brighter than it ever has.

Thank you to the people of Kansas City.

This has been a love affair like none other.